Your first broadcast on Periscope can seem pretty scary, but these tips will help you get started and be confident straight out of the gate! First things first, you must follow me 😃. Nah, I’m just kidding! But it would be great and greatly appreciated if you did. My periscope handle is @LovelyCreationz – couldn’t get DailyDosewithLiz, too many characters. Which actually leads me to the first tip…

Tip #1 – Be sure to find a handle that suits you and what you’ll be scoping about.

If you have not created your Periscope account yet, keep this in mind when you get ready to create it…Periscope is Twitter’s live streaming app, so you’ll create your account using your Twitter handle. However, if you need to create a new Twitter account, be sure to find a handle that suits you and what you’ll be scoping about. Remember that Twitter and Periscope will only allow you up to 15 characters.

Don’t be caught as an egghead in someone else’s broadcast! The easiest way for someone to learn that you are a Periscope newbie is comment in someone else’s broadcast, have them look into your profile and see that you are an egg. You will not get followers because no one wants to “friend” an egg. Honestly…think about it…it’s an egg. People want to know who you are, they want to get to know you, and if they don’t see an actual picture of you or what you represent they will click out of your profile without clicking “follow.”

Tip #3 – Titles are everything!

Before you begin each scope, remember that TITLES ARE EVERYTHING! Always be sure you have a great title for your broadcast. Something that is attention grabbing, that will make people want to click on your broadcast and see more. Emojis are good to include in the title as well, but my advice…don’t go overboard with them. Depending on how long your title is, you’ll only want to use a few emojis to catch people’s eye if they’re looking at the list view. Having too many emojis can sometimes be a turnoff and could takeaway from the message you may wish to convey, which will result in little to no viewers in your broadcast.

Not having a tripod won’t make or break your broadcast, but could lead to some rather embarrassing experiences. If you set up your device by leaning it up against a stack of books or on a book holder not meant to hold heavy electronics, the device could slip and then everyone will see that load of laundry you have hiding in the corner or the pile of dishes in the sink that you’re ignoring. You really should have something securely holding the device on which you are broadcasting. You can find really inexpensive tripods at your local Target, Wal-Mart, and even in drug stores.

What I mean by this is make sure that your adorable face fills the screen. Only seeing the top of your head in the bottom half the screen and a blank, bare wall above you can be very distracting to viewers…assuming they stay in your scope longer than five seconds. It should be noted that when you start a broadcast, Periscope developers have made it so that the broadcast begins with the back camera. So it would be like you recording someone standing in front of you. Only after you begin broadcasting do you have the ability to turn the camera around by double tapping on the screen. Be sure you’re not starting the broadcast by showing things you don’t want seen. Many broadcasters will start with a computer screen in front of them, and that screen often will be their website or something introductory that they’ve created with their name or group name on it. 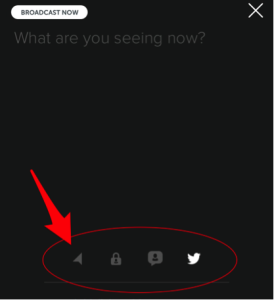 Unless you’re selling a property or scoping from a popular location that you want to share with the world ==> TURN OFF LOCATION! Periscope’s map view allows viewers to zoom in to your location as close as street view! 😳 Yes, this can be scary but location services only works when it’s on – when the logo is white. If it’s gray, then it’s not on, rest assured.

Hello and welcome to Daily Dose with Liz - a blog about lifestyle, beauty, craftiness and planning! I do hope you find the posts useful. Be sure to leave me a comment and let me know! Also, be sure to click on the icons above to follow me across the social media platforms; including Periscope (@LovelyCreationz)!

Find me on Bloglovin’